Sticking with the program, I have been out on a number of excursions into the cold, cold winter woods.  There has been no snow, which is a drag, because I was really hoping to get some idyllic snowy shots this winter…but alas, it’s either not cold enough to snow..so it rains, or it’s bone dry and bone cracking frigid outside.  Well, it hasn’t been that bad, but a lil’ hyperbole now and again is good for affect.

It has been pretty chilly, though, and the winter photography and note taking is made more difficult by this fact.  It’s basically a matter of frozen fingers.  I can’t write with gloves, nor can I manipulate all those dials and buttons on the camera without hitting something I didn’t intend.  So, I remove the gloves, or try fingerless gloves and my fingers freeze.  I guess this is part of the challenge, and I’m not complaining so much as trying to create some context.

I went out today in another futile search for a Belted Kingfisher I discovered by a bridge a few weeks back.  He was still nowhere to be found, but Salt Creek had iced up along the shore again and there were some pretty interesting shapes and icy things to look at.  The creek was flowing quite rapidly about 3 or 4 yards from the shore on either side and wide sheets of ice were sliding by and some of them would pile up in the middle and make that ubiquitous sound that ice flows

make when they’re crunching up against one another, just on a smaller scale.  I sat and listened and watched as air bubbles moved along caught up below the ice along the shore.

It was about 12 degrees or so I believe, with a windchill of -10 today when I was taking these pictures.  It’s pretty fascinating the different shapes and formations that are created as ice forms, and I think these pictures are somewhat indicative of that.  The sun was coming out in spurts and I had to hunker down next to the shore at kinda odd angles,  and with the frozen fingers, I’m not 100% pleased with some of the results in terms of focus, depth of field, and all that jazz.  I guess if I had more wherewithall I would’ve just lain down flat on my belly and gotten the shots that way.  But this isn’t National Geographic, this is just some dude’s blog about hanging out in the woods and freezin’ his tookis off. 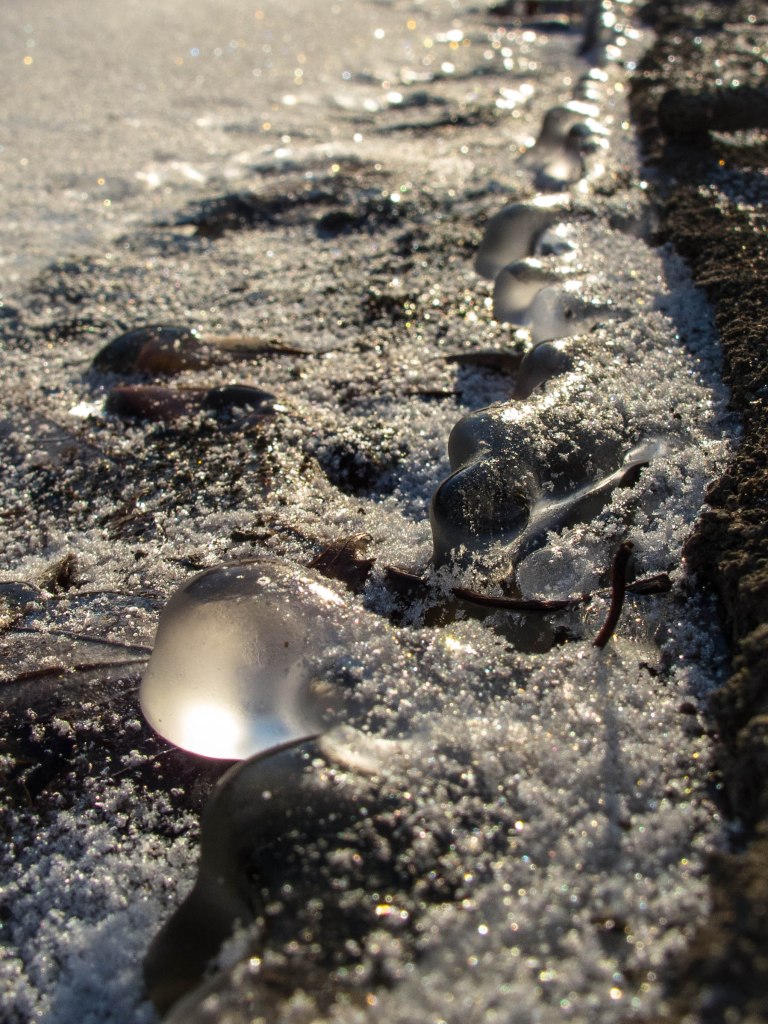