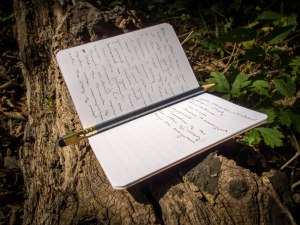 All is still.  Then you hear the breeze.  You hear it before you see it, and it’s felt before it’s seen.  Somewhere in the distance, in the treetops back behind you. Moments later, off to the side and up the trail, you notice the smallest of branches and leaves in the thinnest of saplings begin to tremble, flutter, and sway.  Then you feel it, the coolness and crispness of this new Autumn across the back of your neck, across your cheek, your fingers and pencil, small pad balanced on your knee.

Your focus shifts, and suspended inches above the ground, once invisible filaments now appear, shimmering in the sunlight, caught up and revealing for a split second  impossibly thin and iridescent threads stretched between leaf and twig, rotting log and stone.

Have they been left there by some wandering arachnid, you wonder, or have they been lifted, carried by this wind, and draped across the landscape?

Everything is connected; this is what was known, has been so often forgotten, and what we are learning over once again.    Nothing exists in isolation, or rises into being apart from creation.  From whence we’ve come and where we go, wandering aimelssly, or with purpose, it is both and the same.   The connections persist, there is no doubt, but they are often only revealed for a moment: that split second when the wind, the light, and the angle of your gaze perfectly coincide to reveal a phenomena previously unseen.  Even then, there is only a glimpse, for you cannot discern where the threads begin and end, only that they’re there.

There may be explanations for all things, fascinating in their own right, and meanings may be lifted from any variety of text.  On this day, however, my scripture is laid out before me in the mystery of fugitive webs, shimmering silk, and the currents of air, rolling down from more Northerly places to shift the seasons, swirl through the treetops, and careen softly over my shoulder and along the meandering trail before me.

Sitting still in the middle of the field.  One tree South of me making a racket, letting the world know that there’s a breeze blowing.  A million leaves flapping in unison.  The grasses and flowers are going to seed, covered in dew, sparkling and billowing.  What few clouds move quickly along and the sun shines down.  Behind me a sudden cascade of dried leaves, birdsong and flight.  A cricket, a steady and sustained chirping.  The leaves falling herald the breeze, which is seen and heard before you feel it.  A small flock of finches dip and veer, chirps and cheeps, whistles and trills.  Alight briefly on the branches and then they’re gone.  Down low in the grasses and seedstalks.  A goose passes overhead, alone, calling out.

What is valuable in this:  sitting alone on a Sunday morning, tripping over limbs, listening to birds and looking at trees that I don’t know the names of?

I am learning borders, edges of habitat seem to harbor a great diversity of birds.

7:47 – Scared a deer and it scared me.  Didn’t even hear it until she blew a fit and bounded away.

This seems very silly, but I’ve been told it’s worth including…for effect, or something.

8:24 – A deep and abiding clarity, yet you cannot remain here.  So you return, again and again.

The air is full of chirps and whistles. Hammering on a hollow log.

8:48 – within a small circle of trees…trash lying about – it must be cleaned.  Otherwise, this is a great spot.

Reflection: my notes suck. i need a watch.